Regardless of your colour scheme, to do a feature wall or not is a complex decision and should be very well considered. I always say a feature wall needs to DEMAND to be featured if you are going to do it because in some contexts the idea can be dated. This idea applies to not only paint but, timber features and tiles in the bathroom.

Let’s use the bedroom as an example, should you have your bed against a wall and the walls on either side are made up windows on one side and wardrobes on the other, the wall with your bed against it can certainly justify being featured.  If, however,  that wall meets two walls of white plaster absolutely do not make a feature of it, as this is where the outcome will appear dated. The image below shows how a feature wall doesn’t really work when surrounded by other masses of plaster while the other sample (which you may recall from The Block Glasshouse) shows how a feature wall should be done – as a feature! 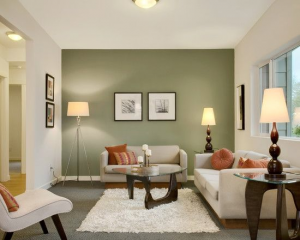 Not the best way to implement a feature wall 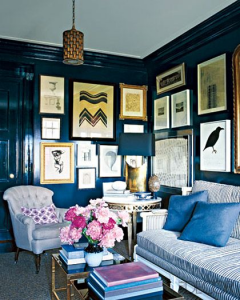 Using your feature wall as a feature

If you have a colour you want to apply to a particular room, why not paint the four walls? And if you are hesitant to paint your room a darker colour in fear of closing in the room, don’t be. There’s nothing wrong with creating a moody interior. Done well, it can add another level sophistication to a space.

We have a charcoal feature wall in our living room in order to conceal the black TV but this wall meets one wall of glass doors and isn’t surrounded by any other walls so here the paint does its job in disguising the TV, gives the home some dimension, and enhances the space rather than dating it.

In terms of using accessories to inject colour into a space, greys, blacks, beiges, tans and creams can be considered colours so if you are partial to a neutral colour scheme stick to variations of these colours and think lot’s of texture and natural materials (wool rugs, sheepskin throws, rattan baskets etc) to create warmth in the home.

Finally, if in doubt create a Pinterest board first to track the colours and accessories that you plan to use in the room.  It’s a great way to pre-determine if everything will work together rather then throwing caution to the wind and hoping it comes together on the day! 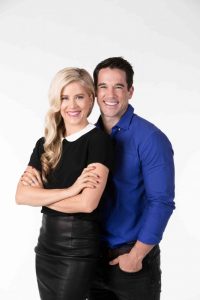 About Michael and Carlene:

Since The Block, Michael & Carlene have gone on to develop their own business called Cedar & Suede, have a blog and consult to a number of Australia’s leading interior brands for both endorsements and product development projects.